This week, three years ago, I was in Paris. Corey is in Paris right now with her daughter and has been posting about it on her blog. Oh how I wish I was there with her.
For quite awhile now, I've been wanting to post about my Paris trip, but other things seemed to take precedence like Farm Chicks, vintage finds, projects I've been working on, etc. But, with this week being the three year anniversary of my trip, I thought I would share with you some stories and pictures of that wonderful time.
Let me back up a bit. In high school I took two years of French and another year in college. Since then, it has been my dream to go to France and see and experience all the wonderful things and places I learned about. As the years went by, I always knew in the back of my mind that I would make it there someday. Flash forward to the year I turned 40. I decided it was now or never and so I planned my trip. My hubby didn't really want to go and I didn't want to go alone, so I invited my Dad who had been there a few years before and I knew wouldn't turn me down. I had never taken a trip with my Dad before, (he and my Mom were divorced shortly after I was born and we became close after I graduated high school and moved to California for the summer-another story for another post) so I wasn't sure what to expect, but he's a pretty easy going guy and I knew we'd have a good time.
So plans were made, hotel was booked and we were off. My Dad was flying from California, me from Oregon with both of us getting connecting flights in Houston so we would arrive together. The week we spent in Paris was magical and completely amazing. Each night I would come back to the hotel we were staying and write down in a journal everything we did, saw, ate, so I wouldn't forget a thing. I thought I would do a series of posts where I share these journal entries with you, my lovely blog readers. I will put in some pictures to break up the writing a bit so you aren't completely bored. Here goes:
Day One in Paris
"Arrived at Charles De Gaulle Airport and was picked up by Eddie who took us to our hotel. Outside Paris, lots of industrial buildings, looks like any other big city. Came into the city of Paris where I was overwhelmed by the architecture of all the buildings. I kept saying 'I can't believe I'm in Paris!' It was surreal. We checked into our hotel, the 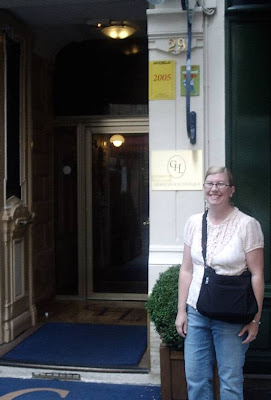 Grand Hotel Leveque, which is an almost not noticeable building on a wonderful market street. Just like I imagined. Neat shops for produce, meats, flowers etc. Man making crepes, yum! Our room is tiny! Probably 10 x 12 with a tiny but updated bathroom on the 4th floor (actually the 5th floor-they don't count the bottom floor). Tiniest elevator in the world. So cute. Room has two twin beds pushed together.
After we check out the room we strolled on the Rue Cler and found our way to the 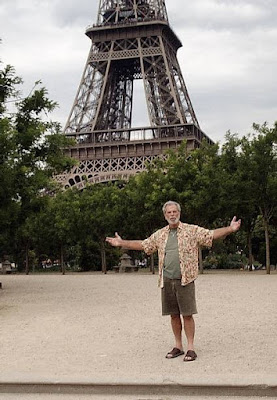 Eiffel Tower by way of the Champs du Mars Parc. It was incredible. So huge with what seemed like a million people waiting in line to go up. I am in awe of with the number of tourists from all over the world here. We loved hearing all the different languages being spoken. After walking beneath the Tower, we hopped on a tour bus and took a 2+ hour tour of the city. Great decision as we got a good overview of where everything is. Riding down the Champs Elysee and seeing the Arch de Triomphe and seeing Notre Dame were 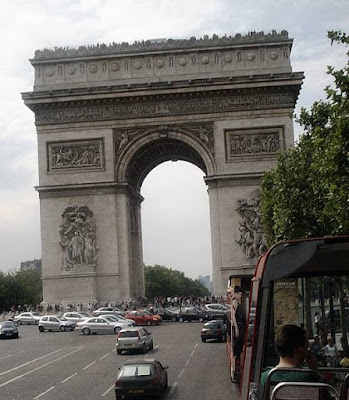 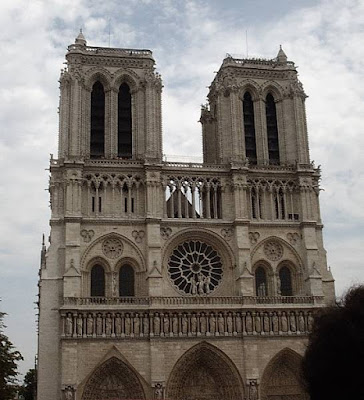 After the bus tour we made our way back to the hotel for a nap and showers. Got lost on the way and was helped by two lovely French women. Very nice. After being refreshed, we decided to have a bite of dinner at Cafe Rousillon down the street from our hotel. Cute, but smoky and food just so/so. I had Chicken Provencal which resembled the chicken I had on the plane over. 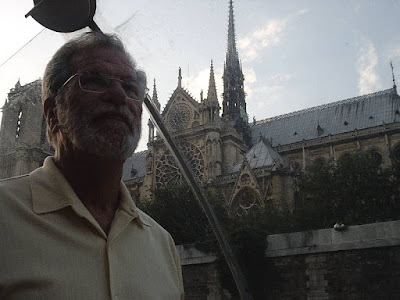 We then walked down to the Seine were we boarded a riverboat which took us down the river for a tour of Paris past all the monuments. Decided to get off the boat at the Hotel De Ville to check out this department store an American couple told us about, but by then it was 9:30pm and closed. We tried to get a cab unsuccessfully back to the hotel which was a blessing, because we stumbled upon the Notre Dame. We went in briefly as they were having a service. It was very dark, but so cool. 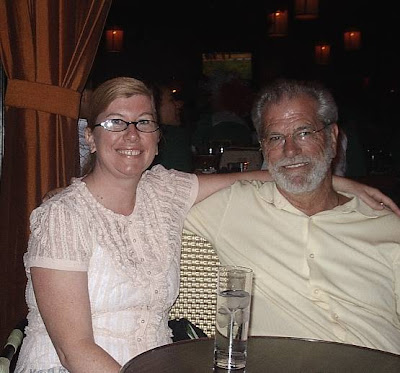 Somehow trying to walk our way back to the hotel we accidentally found the lively Latin Quarter where we stopped at a cafe for Creme Brule' for me, glass of wine for Keith. Lots of young Parisians and tourists. Neat alley like streets with shops open late. After finally getting a cab which dropped us in the vicinity of the hotel, we finally made it back where we collapsed at about 11:30pm.
Tomorrow we will take in the Champs Elysee and a movie. Possibly the Marais neighborhood or Montmartre."
Please keep in mind, this trip was pre-blog and my picture taking skills were and still aren't the greatest. I hope you enjoyed this little stroll down memory lane with me. I will be back soon with pictures of some of my latest finds and will being doing more Paris posts throughout the summer.
We are going camping at the beach for a few days this week. Nothing like a trip to Paris, but still fun family time. Have a great week!
Posted by Lisa Johnson at 7:03 AM

Oh, thanks for the wonderful post. My BFF and I have decided to go when we turn 50, which gives me 8 years to learn French!

Lisa, I just bought you a birthday gift that is Paris related... What an amazing coincidence!!! Lovely memories, and I am so glad we shared some of them together!
Isabel

What a wonderful story & I can't wait for the rest! The fact that you took this trip together with your Dad, is the best part, I think!
Have a lovely week :o)
- Sylvi

Paris does sound great. My little sister went last year and her Christmas Cards were of Paris. My daughter has dreamed of going since reading a 500 page book on Marie Antoinette in 7th grade. We hope to send her when she graduates from College. Loved your pictures. Erin

What a wonderful time you must have had. This past May was our 5th year since we had been there for our anniversary. I should do a blog post about it too. You are bringing back memories! I think we should have done the bus tour. Great idea.

What a great trip and wonderful memories you will have to cherish for along time!
xoxo
Amy:)
www.todayscountrystore.typepad
www.amysvintagecottage.blogspot.com

What a fun story...I love the pictures they're are amazing...Can't wait to see part 2.
STephenie

I'm glad you shared your trip with us. It's fun to look back and remember...It seems along time ago since I turned 40!! Oh it was a long time ago and it was even longer since I was in Paris.. a mere 32 years ago..
Hope to see you this week!
JOY!

found you through poppy and ivy, so just thought i'd say hello,
kecia

Isn't Paris fun? I just adore it too! I can't wait to go back someday. Very cool!

A trip to Paris sounds divine!

What a wonderful trip! Tell your dad he's very handsome!!!

Could you send me your e-mail when you get back from the beach...send it to laurie.miller46@gmail.com

I adore Paris. I will be there the end of September and cannot wait. Dinner with Corey in Provence will be one of the highlights of the trip. Hooray!

Such a wonderful post!
And...ANY time spent with family is time well spent! Have fun on your trip!
Tracey

Romantic place for a couple, hmmm! It just gave me an idea where to spend a romantic vacation with my partner in life.

Ohhhh I want to go to Paris soooo bad ! What wonderful pictures ~

Romantic place for a couple, hmmm! It just gave me an idea where to spend a romantic vacation with my partner in life.

I have never been to Paris but I hope and i pray that i could come and visit the place.
God bless!!!