Yesterday was certainly a very busy day for me starting with sitting with my Grandma. Mom had to run some errands so I volunteered to come over. It's been kind of hard as my sweet Grandma is having such a hard time communicating and her memory is so bad, so I just sit there with her and hold her hand and read parts of the paper to her.
After that I had to rush home as my husband was expecting a fed ex package to be delivered that needed to be signed for. I made it just in time as about 5 minutes after I got home, the package arrived. Then I did a little errand running myself to get some last minute stuff for Halloween, stopped by the High School to snap a few pictures of my favorite lunch ladies in their Halloween Costumes. I told them I wouldn't put this on my blog, but they were so cute and none of them actually read my blog so here it is. 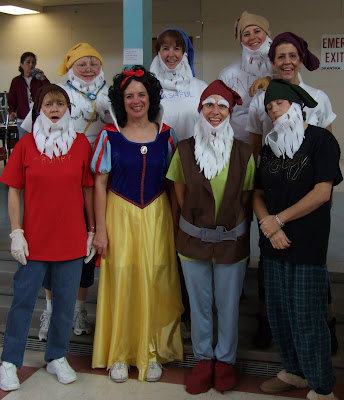 Don't they look cute? Obviously they are Snow White and the Seven Dwarfs. Kim, the kitchen head, was Snow White of course. I think they look so adorable. They are really the nicest group of women and I always have so much fun working there.
Here's my good buddy Debbie as Happy. A few years ago she dressed up as Napoleon Dynamite for Halloween. Wish I had a picture of that, because she really looked like him. I will have to find a picture of her when she is just being herself, cause she is just so adorable. Okay, am I allowed to say "adorable" twice in one blog post? ha ha 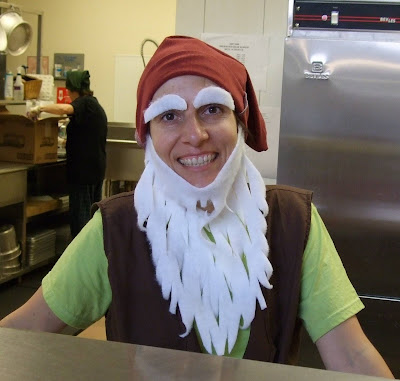 I can't believe that I forgot to take pictures of my own kids dressed up for Halloween. My daughter was a 60's girl and my son, a bum. We had a bunch of kids over for a pre-trick-or-treating pizza dinner and then my daughter went out with her group of friends and my husband took my son and a couple of his friends. I stayed home and passed out candy and watched my new favorite show, Pushing Daisy's. Anyone else love that show? Anyway, a good time was had by all. Getting them up and going this morning is another story.

A couple weeks ago I was checking out Karla's blog and found a link to Beachy's blog. Beachy was hosting a blogger craft challenge and here is what I came up with. 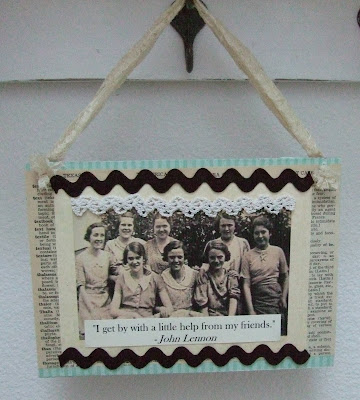 You were supposed to come up with something crafty with the center picture. I am pretty new to the whole collage thing, but I did this in about a half hour. It was really fun. Now I'm thinking I might have to try and find some kind of swap to be part of. I always see such wonderful swaps bloggers do and wish I could do that too. I guess I have swap envy. So, if anyone has an idea for a swap, count me in.

I need to head on over to Monticello again to clean up a big mess. I got a call on Tuesday saying they sold a dresser. Remember this one? This is the one that sold and since we had a bunch of stuff sitting on top of it, that stuff is probably all on the floor now. I hate stuff on the floor of our booth. 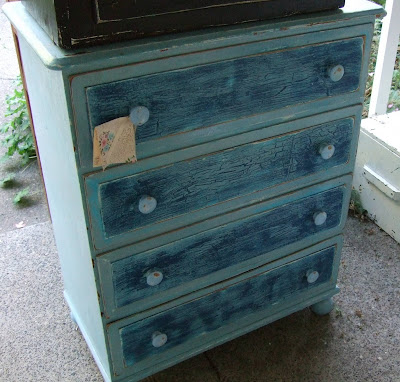 Also, I will be taking my new display cabinet which I got back a week ago from the glass shop. It will be perfect to house all the little things I don't want to mysteriously disappear from our booth.

Have a great Thursday everyone!

What a darling collage! You really have a knack for it! Now I want to see more of your creations!!! Thank you for participating... I've added you to the link list. =)

I love your collage!!!! It looks so pretty. You should definatly join a swap, you will love it.

You will have to join in my Christmas Craft Fair!!! I love your collage from Beachy's.
Also loving the Disney characters...especially Sleepy who is playing her part so well!

Your collage turned out cute. I love that quote from John Lennon.

Lisa..I love your collage!
Especially the sentiment...
You must do a swap, they are so fun!
Priscilla

Your college is great and you really should join some swaps. They are so much fun.

What a great collage! I love this challenge, it's so fun seeing what everybody did! I also love the picture of Snow White and the Seven Dwarfs. Cute idea with the costumes.

Great interpretation of the craft challenge, the quote is perfect for that photo.

Really enjoying seeing what everyone else is doing with the photo as much as I did playing with it.

I love your collage! Great job..

Hi!! I can only say what others have said before me: that John Lennon quote is so right for your lovely collage!
While I was here I peeked around. Haha, I'm always too late for a give away or for a swap, sorry that I missed your give away too. I do love that vintage wallpaper aaaaah I just love your blog and I will return here!

Love what you came up with for the craft challenge.
The costumes are so cute.
I also love Pushing Daisies!!!! Michelle of Gingham World put me onto it and now I love it!

Thought the halloween picture is just gorgeous!! What a fun bunch of people to work with!

I'm glad you shared the pictures. They are adorable!!! What a cute idea!

You did great with the collage. I love the gift tags you've made, too. You're on a roll!

I think that photo of Snow White and the Seven Dwarfs is one of the best costumes I've ever seen. How creative is that? I'm in France and didn't see one costume but that's not what they do here-they take flowers to the graves of relatives who have passed on. It's more religious.

Hey Lisa, found your site through Beachy's...love what you did with the antique photo as well..just so creative and everyones is so different.

The collage is wonderful and gives me a good idea for some vintage family photos we inherited.

Some people are so talented...you're one of them. THe collage is WOW..

Now see if it were me, I'd make it home 5 minutes after the fed ex guy left! Glad it worked out timely =) Your crafty challenge item turned out really neat. I'm trying to get crafty again but I just can't fully get in the mood. Blessings.. Polly (p.s. I think the thing your're asking about is a vintage comforter. I haven't decided yet if I should keep it or sell it)

Hi. I stopped in at Joys shop today and she and I got to talking about blogs, she mentioned you so here I am, visiting. I see we have the same blogging friends! How fun is that!! Well, Im down in Keizer, come visit my blog, I wish I had made it to the Antique Fair! I've been looking for old flowers and lace. Well, nice to meet you! Laurie

Seems you had a great time. Looked very good LOL.
And the cabinet is great.
Hope you have a good Sunday.
Love Elzie