Ever since I saw Isabel's pantaloons at Farm Chicks, I wanted some too. Then last summer when Linda was visiting, she had some cute ones too. I definitely had pantaloon envy and have been looking for some to call my own. I think they are just too adorable poking out from under a skirt or dress.

I decided if I was going to own some pantaloons, that I would probably have to make some for myself so that's what I did.

First, I found a pair of cute linen crop pants at Value Village a few weeks ago for $4.99. I thought I would just add some rows of lace or ruffles to the bottom. I couldn't decide what I wanted to do with them so they just sat there while I did other stuff (like watch netflix movies on my computer.)


Yesterday I was in my very messy sewing room and I picked up a Shabby Chic curtain panel off the floor and spied the ruffles running along one side. (Insert lightbulb moment here!) I had bought that panel at a thrift store awhile back not really knowing what to do with it, but hello, it had ruffles, it was white, it had swiss dots and it was cheap. Enough said.


I decided that I would just cut off the ruffled part and sew it on the bottom of my pants and voila! 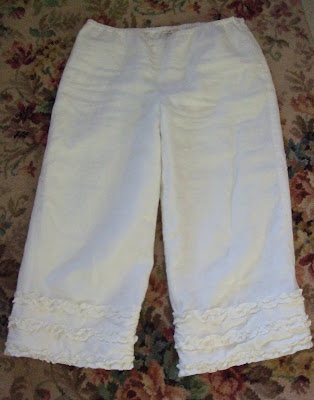 Instant adorable and super duper easy! I think I will just have to wear these to a Christmas Potluck I am going to tonight. What fun! I even have enough of the ruffles left to put on a cute apron so that will be another project to work on later. 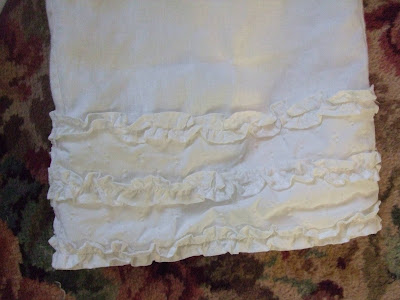 For your viewing pleasure, here are some more White Wednesday pictures from around my house. 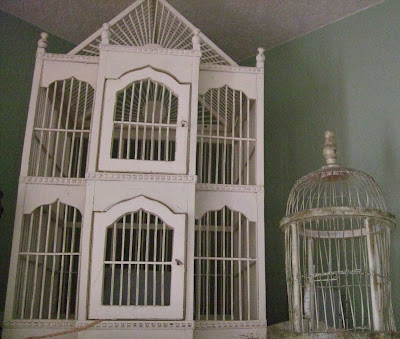 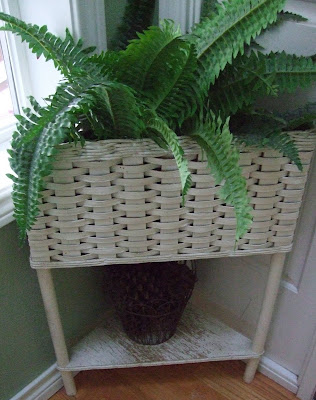 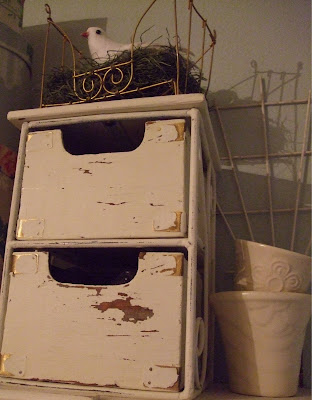 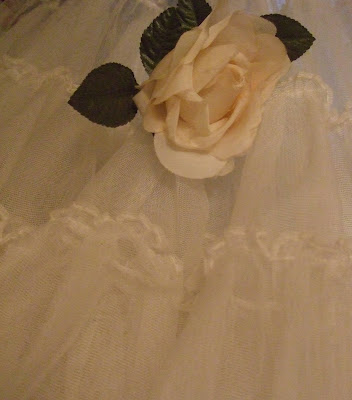 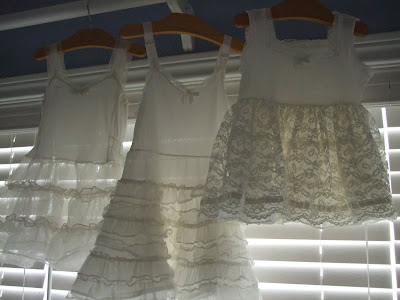 Hope your week is going great! I'll be back soon to show you those Christmas ornaments I made.
Posted by Lisa Johnson at 9:56 AM

Oh, Lisa, love your ruffled pantaloons! What a great idea! And all those lovely whites in your home are just wonderful.

I too love Isabel's pantaloons. I have a ruffly red pair of bloomers (shorter), but don't wear them. Your post makes it look easy enough to make a longer, more wearable style, while recycling at the same time. Thanks Lisa!

How adorable are those ruffly pantaloons?!!! So cleaver! Can't wait to see the apron.
~Debra
The capers of the vintage vixens

Hi Lisa; What a great idea, they turned out so cute,, great job. I would not have thought of that.. I love all of your pretty white pretties... have a great week.

Lisa,
I wouldn't have thought of that either! Have fun at Monticello.........

Pantaloons, what a cute idea! I love the childs dresses/ slips hanging!

totally loving those pantaloons! Great job! I'll be looking forward to seeing you in them next time our paths cross. OX Lulu

Lisa, those pants are the cutest darn things!!! i want a pair:)

Lisa , You and your pantaloons were looking adorable when I saw you at Monticello. Hope to see you again when I can form a complete sentence! :0) Sue

Too cute! You've convinced me to follow and that I might need a pair of pantaloons :0) Nice to meet you. Another rose lover, Lynea

I love pantaloons, I'm wearing some to work today!
ALicia

I had so much fun hanging out with you this past week! Loved those pantaloons!

I love those pantaloons they are great, smart thinking. Miss you. Hugs Florence

Now I have pantaloon envy!! Too cute!!

DIVINE is a Versatile Los Angeles Latin Band with an experience Of over A Decade. Latin Wedding Band DIVINE is composed by 7 elements that dominate and combine the art of music to perfection, an onsite audio engineer attentive to perfecting all sound requirements, a lighting technician who integrates visual effects, and production personnel assisting in reducing time of installation/un-installation.